​My Reading Life Part 2 : Ropey Thrillers and Books I did not Understand 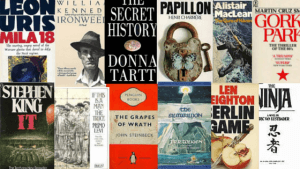 Entering into my teenage years, swerving to avoid the hormones, I upped my reading and started in properly on a subject which would take me through the next few years: Northern Ireland. Glory Boys, a thriller by Gerald Seymour, a writer I don’t think about that often anymore but who in the late eighties was my everything.

Glory Boys had Arab terrorists working in cahoots (too weak?) with the IRA in London while being hunted by an alcoholic British Agent, like for god’s sake what is there not to love?

There was also the seminal Harry’s Game which was his first book and still his most famous. It tells the story of an undercover British soldier trying to track down an IRA assassin, in fairness what more could a body ask for? Seymour is a real hero. Before he started writing books he was a journalist who had the important knack of always being in the worst place at the right time.

Luckily books were always being flung at me from all sides. Next was Riding the Iron Rooster by Paul Theroux which was a curious and brilliant travelogue through much of Asia and China.

Theroux had a Chinese government guide with him at all times which made the stories and the experiences more insightful when it came to understanding the danger and  bizarreness of a country as amazing as China, being communist and still relatively closed.

I read some le Carré but at the time I could not figure out what the fuss was about, the subtleties of duplicity and espionage entirely lost on me, I wanted them to kill each other.

Gorky Park by Martin Cruz Smith is one of those gripping books which has been mimicked by many, but none of the many schlocky pretenders have ever come close.

It shone a grey light on the decaying USSR, the drab normalcy and the corrupt crapness of everything except the people’s inner lives and buildings from before. Special mention for the scene when investigator Arkady Renko, in preparation for interviewing a KGB operative, eats a pound of lard to line his stomach.This allows him to go vodka for vodka and get the information he needs. I admired this feat enormously.

The Guns Of Navarone is a book with no female characters that I have read at least ten times.

The characters and the action are so well drawn that you can afford to have a few drinks while reading it. Every person in it is a military super hero with one twist, they can die.

Len Deighton has written and sold a lot of books but I was never that gone on any of them. He did have some of the greatest cover art ever though.

I could never really quite get what the significance of the apples was, much like the opaque spy plots he churned out, but they sure looked cool.

Eric Van Lustbader’s Ninja is a brilliant book especially if you are a young teenager.

Loads of sex, loads of ninjas and nonstop insanity where everyone has a phenomenal amount of time to lead double or triple lives.

The Secret History which remains one of my all-time greats ruined many things for me, university particularly, as I then expected university to be like a small New England liberal arts college.

It also made me begin to look around and understand that some of the friendships I had in school would fade and I would lose friends forever. I finished the book with a yearning for nothing to ever change and everything to remain as it was.

Prayer for Owen Meany by John Irving, who for a couple of years was my favourite author, was a strange book, one of the few books I have ever enjoyed with any religious content.

It also contained Irving’s usual amount of weird sexy scenarios and a world coloured in by eccentricity and unforeseen tragedy.

I recently bought a close friend of mine IT by Stephen King as they had never read it. King just gets childhood, never more so than in this book.

It is straight up continuing on into your dreams terrifying, you really don’t ever want to close your eyes or the book. My friend, an adult with no shortage of courage normally, took a year to summon up the wherewithal to do the book. It is that long and frightening you really have to commit and steel yourself to do it. But it is definitely worth it. Pennywise never leaves your peripheral imagination ever again.

Ironweed, depression era America, a hobo couple scratching around, hopping railway cars avoiding being beaten to death but only really delaying the rust.

Papillion, the movie is good but the book is up there with anything that has ever been put down on paper. Like any prison book it simultaneously depicts prison as the best place on earth as well as the worst. The book caused mayhem in the French establishment as the author is the main protagonist and claimed that it was 75% true.

The prison island and the Frenchness of the cruelties are fascinating as are his many successful escape attempts. The tropics really lend themselves to the task of driving men crazy and the idyllic terrible scenery blinds us to what was a squinted sunny hell.

Along with most young people I was a complete expert on every subject known to humankind between the age of 12 and 18. Hence I read many books just for kudos, from whom I have no idea. But most of these important books were far above my ability to fully understand. I read Primo Levi’s If this is a Man and The Truce, when I was fourteen as they were purportedly about the Holocaust.

I was addicted to the Holocaust as a child, having read Milo 18 and Exodus,I was on constant look out for anything on these subjects. But If this is a Man is a dense book with concepts and layers far beyond what this young teenager could comprehend. Years later I returned to them both and while I would never claim to fully grasp either I do now know what it is I can never understand.

Milo 18 on the other hand is a rollicking tale of the courage of the Jews who fought back while the Germans were trying to empty them out of the Warsaw Ghetto and into the Final Solution. It is a very affecting book, both sad and uplifting. Leon Uris is often criticised for writing overly populist books, a wonderful slight for any writer.

I read Sula by Toni Morrison, a bewildering novel for most kids, or me anyway. I recall not knowing what the hell was going on for most of the book.

I “read” The Brothers Karamazov which was a complete waste of time as it only meant that I had to read it all over again ten years later. Not to mention what a complete eejit I looked walking around a holiday campsite with a red bound hardback.

Afterwards I sought out the movie to make some sense of what the writer was going on about. But that only served to introduce even more confusion into my fevered brain.

Having loved Lord of the Rings I read The Silmarillion and emerged afterwards as if I had just smoked an exploding cigar. What the f…………..?

I have been assured since from anyone I meet from Middle Earth (not New Zealanders) that I am an idiot for not liking nor getting it.

Then there were the books I will continue to read until I die, shouldn’t be long now, Catcher in the Rye, The Great Gatsby, The Stranger, The Grapes of Wrath, actually that last one is a lie, I will never read it again. 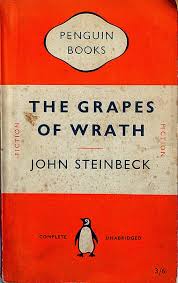 It is a bible of sadness that grinds you down and down to dust.

I was going to mention Martin Amis but anything of his I have gone back to has aged dreadfully, even London Fields reads as glib pastiche. It’s his autobiography Experience that remains resolute and life affirming despite it being so tragic and moving. His incredible prose sears into our memory the story of his cousin Lucy Partington who disappeared in 1973 and was later discovered to have been one of Fred West’s victims. There is something so sad about even the lost years of mourning, the hinterland of time when no one knew she was dead, shocking and slowly awful the whole story.

PS These were the covers I remember gazing at every now and again wondering whether they had anything to reveal. If I have not put in a cover I couldn’t find one I remember.

Please share your own books you may or may not have understood.