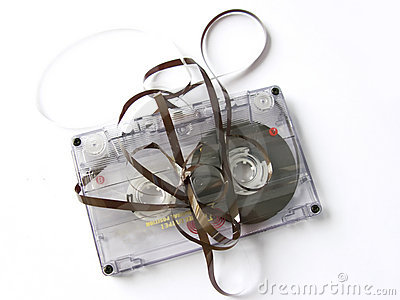 As a neurotic maniacal child I always had a strong desire to use bad language. I was the eldest child, so as any other eldest (best) child can vouch for I grew up with rules the equivalent of a gulag’s. In this gulag of the mind (ahem) bad language was seen as the worst of all sins. I was only young so there really were not that many sins available yet. Swearing was the obvious one, stealing and of course lying. But swearing was my forbidden fruit.

I am not sure I remember exactly when I did it. I was probably around six years old, but I do remember when I first heard it.

I was so completely panic stricken and freaked out that I nearly keeled over. I vowed to myself to destroy the evidence immediately.

My family was due to go to Belfast to visit my granny the following day and I stowed the tape on my person until then. All possible scenarios were worried and fretted over. Especially me being hauled out of the car at the border and searched, tape discovered and played to a room full of British soldiers, RUC and parents. Miraculously that did not happen and the tape and I made it over the border and happily to my granny’s big house in Belfast.

Later that same day after eating as much as possible I hid the tape under a floor board in a room that nobody ever used, yeah it was that big a house. However I slept fitfully that night and far too many entirely plausible scenarios swirled through my head about the discovery of the tape and my subsequent conviction. So, early the next morning, I got the tape and buried it at the end of my granny’s garden, right in behind the garage. Satisfied, I completely forgot about the tape and moved forward to some brand new worries.

A couple of months, maybe even a year, down the road I was over-hearing a conversation my parents were having about my granny. I had discovered that adults had some seriously brilliant stuff to worry about and I had recently fallen in to secretly worrying about what they were worrying about. But what I heard brought me right back to that feeling I had when first discovering my crime. Behind my granny’s house the local health executive were putting in a HIV centre (I think it was).

I broke a sweat and retreated with the old worry back burning a hole in my brain and worse in my stomach. Although I could barely think, I knew one thing, I had to move the tape, again.

The weeks coming up to our next visit up north were anxiety filled and similar to walking through soup. I could only really ask my parents so many times about the construction site at the back of my granny’s without arousing their suspicions, so I spaced them out and bided.

Eventually after around a thousand child years I got back to Belfast. When the coast was clear I made my way down to the bottom of the garden and dug up the tape. I knew I had to deal with it once and for all so I escaped from the garden, bewilderingly through the hospice next door as dusk was falling and made my way out on to the road. I was sweating profusely by this stage and had a ticking clock in my head counting the seconds until I would be missed. I streamed the tape out of the eh tape(?) and scrunched it up, then I looked around for any RUC, and plunged the cassette in to a hedge where nobody could see it. I scampered up the street, down the side drive and in the back door to freedom, vowing to never ever ever return to the scene of the crime again.

In the following years as memories of my crime faded and my granny moved away (not far enough away mind, but away) I could still be thunderstruck by a lightning bolt of panic and worry that someone would find the tape, play it and trace it all back to me.

But sure that’s never going to happen is it?

PS. We always do return to the scene of the crime.