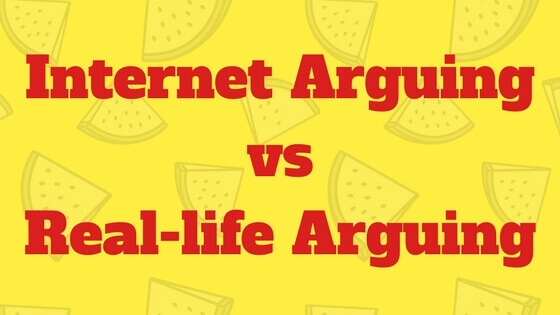 Picture it, hurtling through space, time and our pervasive atomic imaginations, we grind to a halt, progress stalled. I’m referererering to this strange phenomenon, this festering illogical pustule that is, internet arguing.

A says – Trump is sabre truffling
B replies – Obama Libyad
B does a lap of honour in ever decreasing circles.

A, “Israel did this”
B, “Hamas, hamat, hamatum”
B retires to his basement for a life of splenic certitude.

B opines “We been killing people in the middle east since a long time.”
A repines “Isis are murderous nihilisticals”
A goes on a Na Na Na Na Na tour.

A “The Koran”
B “The Bible”
B bows as the curtain comes down, dead emoji flowers showering down on her.
You get the pic.

In the tactile pollinated real world, internet arguing is beginning to contaminate real life arguing.
Internet arguing exists solely at the proverbial(???) back of the bus, the shouted insult accompanied by the slamming door, in teenage dirtbags, and of course on Planet False Dichotomy(another day).
40,000 seconds ago I was having lunch with a friend of mine in real life on earth.
We were chewing on life’s gristle and some scampi, and started to disagree about something. I’d started the talking, my friend weighed in with what he thought was the knockout blow. No doubt everything he said was correct and I couldn’t fault it, on the internet he’d have won the day, received his prize of less than nothing and immediately got to smug off to all his friends who he doesn’t know.
I was about to throw myself off life’s balcony into the pit of who cares, but a thought occurred to me, his point did not really speak to mine, like, they knew each other and all, like, they lived aside each other, but that was it, they coexisted. Both right. They could have been both wrong, the same principal still rules the school of thought.
The erosion of the whispered voices of the middle, not class more ground, no fence sitters per say(Scottish accent), more like fence leaners, continues apace. The physics of cream has been reversed, no longer does it rise, it congeals and sautés off stage left, to lie down in our arteries until no more.
We have lost the ability to think and discuss. Maybe because social media has infested all our brains with a swarming swarm of acid tongued wasps smarming our synapses. Contempt marches our veins, jack booted and badly suited for empathy or exploration.
When presented with one idea that is correct, followed by another that is correct, it is not FIFO, it is levitation of ideals, the opening gambits rather than the closing gong.
I used to be able to do it, there was a brief moment back there, back there after adolescence. When I realised you could think two things at once.
That space still exists. Point scoring is a mirage. Coup de grâce commenting is for the angry birds.
The world is hoven from contradictions and hypocrisy. It could not be anything but.
There is no such thing as a non hypocrite anywhere on earth.
There’s only us.