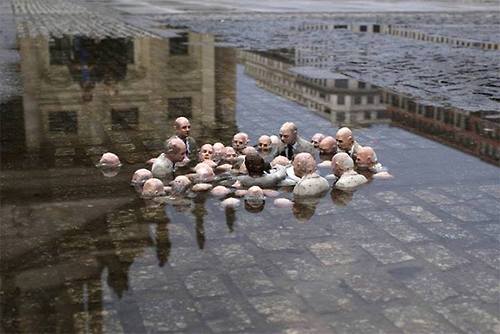 In fairness, let’s face it, one of the top 3 worst months. It is forty days long and no one has any money except “those” who save money. The best thing to consider doing is; quitting drink. This has its ups: better sleep, less January, more endorphins, downs: not seeing anyone, never going anywhere, living in a cave and hermit hair.

After having eaten the produce of a small farm in December there is the problem of having a gut that sits down at, and on, tables with you. Many Irish guys look pregnant.

Another thing to consider is going away to the sun, the places that are warm in January are nay great unless you have money (see life). In Ireland January is like being on a night planet on the dark side of the sun where it has been raining for 44 million light years, and the rain is frozen shards of space ice.

Good things can happen. They sometimes cancel days because of snow, but that is still a rarity. For Ireland climate change thus far has only changed our summers to be more like our winters. Thus we are still on the fence about climate change, we want to see exactly what this “change” is going to be before we decide if we are pro or con.

Poverty and loneliness. Supposedly the worst month for suicide due to Valentine’s Day. But that is an overly simplistic view of humanity me thinks. It is short, so pay day comes quicker. Valentine’s Day or Couple’s Christmas is in it, the first of the 3 Christmases.

There is the whole leap year situation which no one understands.

Other than that February is one boring month, bland, grey and smells like damp. But but but…..

To be fair, you can be lucky now and again and walk outside to sheer silver brilliance. When the horizontal light from the nascent sun sears into your eyes and briefly reminds us what a spectacular planet we live on. But again, rare.

Some people think it is the start of spring. Those people are idiots and mostly work in primary schools.

To be born in February your parents had to be having sex in, like May which is understandable or April which isn’t.

Top 3 best months. For starters it has my birthday. It also has St. Patrick’s Day, now the international celebration of alcohol, Irish self-loathing and Irish triumphalism, all seemingly interlinked.

March is the second longest month in the year after January. It begins with millions of eejits going on about in like a lion out like a lamb and ends with the exact same people still saying the same dumb shit.

It’s concave in shape with the middle being almost completely curved like a pretty bowl. Most people get stronger during March because it has elements of endurance to it.

It is another fake beginning of spring month as it is still completely and utterly winter.

It normally has 8 Mondays.

The weakest of months. 30 weak days one after another draining our will to live. Most people don’t remember anything that happens during it. One of the main reasons sport was invented.

The final fake spring month. Can seem like spring and it has been sunny the absolute odd time.

An extremely untrustworthy month, mostly filled with taking it slightly handy after the 1944 Eastern Front like drinkicide of March.

April’s only decent trick is pretending that there is going to be a good summer. Only fools fall for it i.e. all of us.

Mostly about beauty and aesthetics and fertility and bounty. The actual beginning of spring. Has normally one week of good weather which can be all we get, so we go berserk. Most people spend the month walking around with their fingers crossed in their pockets muttering,

“I hope it lasts” knowing full well it hasn’t a notion.

The busiest month work wise. We are fed up at this stage and just want to get work over and done with.

Flowers are acting sound and showing off which cheers most people up.

It is one degree above dying. Shockingly pale school kids are still forlornly looking out the window as the last crop of sun is harvested and shipped off. They know deep down there may be none left by the time they are released.

Music sounds better and carries further and everyone is generally in a winking mood.

Hard to beat. Definitely top three. Sexy as all hell. It begins with a cat walk swagger, continues with a long languorous strip tease and ends with nudity. Everyone gets kissed if they want to in June, everybody. Birds and bees are insufferable the whole month, they nearly ruin it.

Most people walk around the whole 30 days as if they have still have tails.

The whole month is rammed full of hope. More babies are conceived in June than any other month. Fact.

A touch short but nobody really notices as it steals most of July.