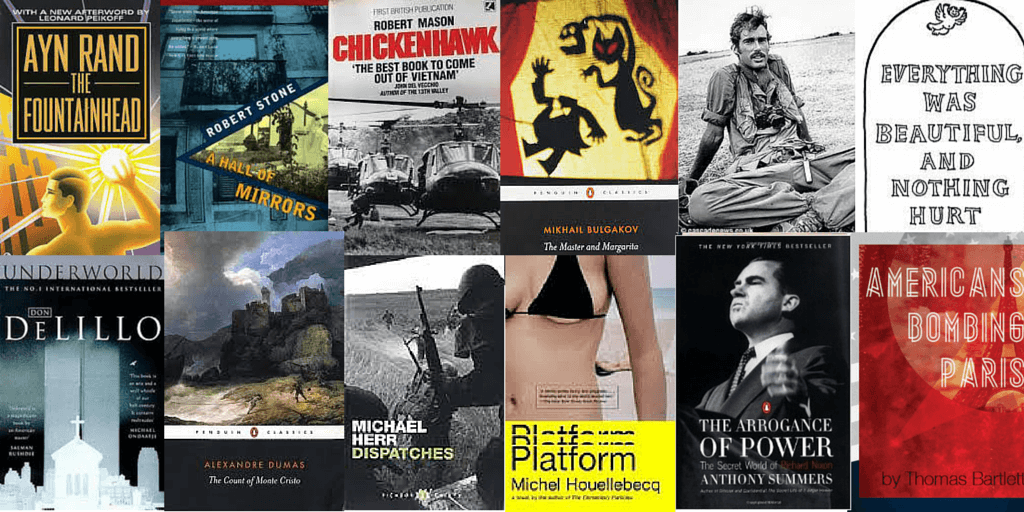 Next I escaped the destructive force of living in a nice house with food in the fridge, for a vagabond life eating foods which later transpired to give people Mad Cow disease. More pertinently, I no longer had the steady stream of books being flung my way. I began to buy my own second hand books. The best thing about second hand books in those days was it was a fantastic pick and mix of titles and you pretty much took what you could get. I forced myself to read Underworld by DeLillo a book that has been lauded fore and aft that I have since returned to and found to be a touch staid.

I remember at the time being among the lauders (?). I had Dublin Bus’s quantum relationship with time to thank for allowing me the millions of hours I needed to finish it. In fairness to Delillo he is a writer who on his day is perfect, and he has had many days. The book has a wonderful opening scene when Sinatra and his mates are watching a famous baseball game and they are drinking vintage coke, as in coke with the year on it made in the original Coca-Cola factory or some such. (Spoiler I may have imagined the bit about the coke.)

I was now reading in a manner, which to an observer was, as if I was trying to set the print on fire.

I had been training myself to read faster and faster.

Chickenhawk by Robert Mason is the story of the most decorated helicopter pilot in the history of helicopters.

Mason was the guy who dropped the soldiers in the jungle clearings and came back to pick up what was left of them. As usual with any book such as this experts have continued to take pot shots at the author, Chickenhawk himself, saying he used all the stories he had ever heard and put them into one book as his own. As a reader I couldn’t give a monkeys, Angela’s Ashes, Papillon and Shantoram all probably did the same.

Dispatches by Michael Herr, the man who wrote the opening speech in Apocalypse Now.

Herr simply tells his own story and that of those around him, journalists and photojournalists who lived like total berserkers and followed the war wherever they could, covering the young American soldiers in battle and at rest. Herr survived and tells it like it seemed to be. He worked alongside journalists who were often from quite affluent backgrounds, Errol Flynn’s son, Sean Flynn worked alongside Special Forces Units and Irregulars operating in jungle hell.

The book is so enthralling that I can read it every couple of years and still find it moving and tragic.

I moved to Paris eventually thank god. In Paris there was a new issue: there were a lot of book shops but new English books were prohibitively expensive. Instead  I met people who read like I did and we swapped books non stop. French TV is beyond rubbish and thus cinema, books and booze were our main pastimes. Drinking with a book is a contentious issue some people liken to car sickness. I don’t. I have read many a book journeying into the nether world of the author, and whatever the hell alcohol I could get my hands on.

I read the Autobiography of a Russian general who in one single sentence destroyed any notion I ever harboured about the Soviet Union. He explained that they ran out of pencils in Moscow which is as damning an indictment of communism as one could hope for. I am going to say the general was Voroshilov but it has proved beyond me to track down the book title. So I may be wrong.

This was followed by a book on Nixon, if anything a more towering biography.

The author explained very clearly and convincingly that Nixon began lying properly as a young man and that once he got going he never once told the truth again. Nixon, a man who was vice president and president twice, is too often discounted or dismissed these days as merely Watergate’s greatest victim. He embodied and foreshadowed the type of politicians we have now.

Sitting in a bar I noticed an American friend opposite me with The Fountainhead by Ayn Rand.

I asked could I borrow it and began reading. After around twenty pages I left the bar and ran home. I devoured the entire book in one sitting, finishing up in the early hours of the morning. I found out later that Ayn Rand is regarded as a complete lunatic by many and a visionary by the other many. I can never make up my mind but I loved reading The Fountainhead. Her other book Atlas Shrugged is a badgering tome but still decent, if you like imaginary free market economics and courageous people discussing steel.

While at the drinking Olympics and a wedding in the south of France I got my hands on The Master and Margarita by Bulgakov.

The book opens with the devil walking along with a cat who walks on his two hind legs; in other words perfectly. Bulgakov wrote it under Stalinist rule and thus didn’t get it published until after he died. One of the greatest satires ever written and full of wonderful imagery and Russian wit. It also has scene stealer Pontius Pilot grappling with killing yer man.

When I arrived in Spain I lived in a cultural vortex with monuments to crassness everywhere ensuring that the Germans, Irish and the English could feel at home on the costA (sic). Thankfully beside the 4 billion garden gnomes (like seriously what the fuck?) there were a lot of jumble sales. And so I discovered a book called Hall of Mirrors by Robert Shaw.

Totally brilliant rambunctious novel that depicts sixties America spinning off its axis. Where it was difficult to know what the fuck was going on and everyone seems off their nut on something or other.

I was struggling one day and found my only choice to be The Count of Monte Cristo and some future BBC costume drama.

I opened a bottle of wine and a box of smokes and settled into my lazy boy to read the Count of Monte Cristo. Approximately four pages in I looked out at the world and I said quietly to myself as if in rebuke, of course. Of course it is absolutely tremendous from start to finish. Dumas published chapter by chapter and he would leave the reader on a cliff hanger or use another literary device which left them panting. I read it in one (very long) sitting and it remains the bench mark for any book.

Vonnegut, I’m not picking any book, is a modern sage, who everyone can quote but nobody ever listened to or else we would not find ourselves in the messes we now are.

Honourable mentions for Houllebecq whose works have turned out to be sadly prophetic about many things.

And who every now and again proves that he is still the most important writer out there. And for John Pilger the journalist. When I bought one of his books in Shakespeare’s Expensive book shop I was told that he was an emotional journalist, a bleeding heart, by the sales jerk. His reports on Australia and Indonesia opened up a world to me that I had never heard mentioned. It turned me into an emotional bleeding heart and I am yet to recover.

PS In other exciting news my book Americans Bombing Paris is out now to download from Amazon for $2.99

I really need people to review it on either site, there are free review copies available for any budding reviewer out there?? Please…