We are all right now 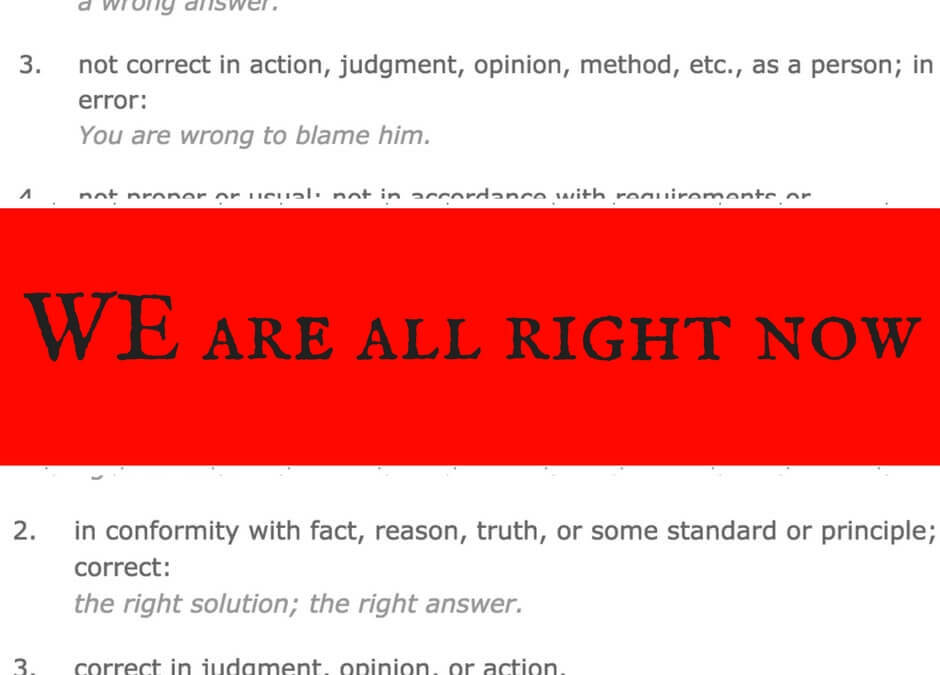 Things have changed. We pass a lot of our blinking hours exploring the cavernous souks of the cyber, only venturing out into our samey homes, scruffling along the filthy wet streets and traipsing through our brutalist lives, when we must.
Things have changed.
Used to be, we could be wrong. People could prove us wrong, or miraculously convince us that we were wrong.
Ahhh being wrong.
Those really were the days.
Oh, someone can still prove you wrong in our Insta-filtered world.
But you’ll never believe it, and within seconds, chances are, you’ll be able to prove them wrong, straight away and right back.
I used to enjoy this, or a younger version of me thought they liked it. But now I am not so sure.

The American election, that increasingly grotesque mirror, is the laser sharp pinnacle of this. On an average trip down my Facebook timeline, a slalom through my Twitter, people can prove some pretty awful things about either candidate.
There is proof.
When we spin the zoetrope, the proof is then consummately and rigorously disproved, or in the jargon of the day, debunked.
So, everyone is right.
We are all right.
Spoiler: we are all wrong as well, but that’s fine, because right and wrong are old and frail, right and wrong may be hanging in there, but they are on their way out. Nay doubt.
Who needs them?
We are sure of our own facts, we all have them now, our own pet facts stuffed into the back pockets of our minds.
We’re happy.
Snug in our smug.
“Research mate”, we shrug. “Got my facts.”
Back during the halcyon wilderness of the Bush years, when the media pretty much went along with the Iraq deception, when they gave him a pass on Katrina, 9/11 and being a human, I along with lots of others, stopped believing the mainstream media. Not all of it. But most of it. The internet helped, I didn’t avoid news, I consumed more of it, but from different sources. Then added it all together and divided by my gut. I was against the war, in that if you asked me I was against it.
I wrote a book about it years later, because contrary to what I would have everyone believe, I cared, and it was a big deal, and we were each a bit culpable. But was I right?
In Ireland while all these geo political moves were being made, we had facts up the yin yang, or as we like to call it, the Shannon. Eventually we choked on those facts, they turned out to be lies. Swallowing them poisoned us and we are still not fully right. Probably changed us a wee bit too, we believe less of everything. Our truths, our facts were economists’ truths or to be factual, lies. There has not been a satisfactory truth to come from what happened to our country. Everyone has an opinion, sorry Freudian slip there, a fact. Opinions are facts now, and vice versa. Deal.
There is something to be said for a move away from right or wrong, they are binary and not much else is. Give me almost anything and there is no clear right or wrong, but none of us want to admit that anymore. Simple answers are where it is at. All sides agree on that, if nothing else. If you are against us on any single issue, firing squad, followed by lime, followed by a doxxing.
Palestine – Israel
Iraq War
War on Drugs
Arms Industry
Brexit
ISIS
Immigration
Some of those are pretty easy right?
Yeah no hassle.
They are not though.
Any stance on them can be proven wrong at any time on the internet, try it. Or an opposite fact can be found that negates the other fact.
“ISIS is wrong”
“ISIS doesn’t exist, you fool.”
At this moment there are people out there who are convinced, and I mean they are certain – sure as shooting – that ISIS are Israeli or US or Saudi or Qatari backed. People in the States are convinced Obama is the worst president ever, not like, just bad, but ever ever.
Chill, they have proof. Of course they do there is so much around.
In Ireland most of our media is owned by one guy, so we get his facts about the stuff he cares about. ‘They’ll do’ Ireland shrugs. Any facts will.
I am not sure arguing was ever a particularly progressive act but it was better than fighting, and discussing was better again. But now arguing has moved to fighting, to rapid fire slinging. Argument is battle, it is war. We all know we are right.

“World War III will be a guerilla information war, with no division between military and civilian participation.” Marshall McLuhan

In the US as we speak we have the alt-right, don’t fret they are already amongst us, you can hear their mantra, rape this rape that. They seem to have been born of Arianism, computers and BO; bound by a psychopathic literalism. It doesn’t matter, they have their own facts as well. They don’t believe the mainstream/lamestream media either, they know they are right. They love Trump, they don’t like women, Muslims, democracy or modernity. Not crazy about Jews either. But they are the most dynamic political force in America and probably the UK today. And they have millions of facts.
So now we arrive where we are today. Arguing has gone by the wayside to be replaced by bludgeoning and slanging, and for the time being we are the poorer for it. The elephant in the room is corporatism of course, for them right and wrong were a disaster so they’ve coopted and triangulated, bought off and disseminated.
‘Smoothing’ is what they might call it, or some other bled word from their semantic silos.

None of us believe the media, nor do we believe each other, unless we share the same facts, then we will believe absolutely anything at all.
I believe Cheney shot JFK, if I ever ever meet another person on earth who believes Cheney shot JFK, then we can have a fact together. This is how facts are born today.

Confirmation bias is to blame for a lot of this, but that is the human condition hence difficult to swerve. The journalists are to blame, sure. But one thing is for certain, we need them. When the fourth estate becomes obsolete all we’ll get is advertising, like now but even worse, even more like now, than now is.
However, I am optimistic. In some parts of the world they still have real journalists, telling truth to power, or at least trying. Here in the blare of the West we’re all a bit off our heads at the moment. Drunk on our research, and spoiling for a fact fight, with no real objective other than obliteration.
Trump and Clinton and Blair and Bertie (Ahern) are our reflections in that fairground mirror, no doubt. Yes, we all believe we are right now.
But we are not.