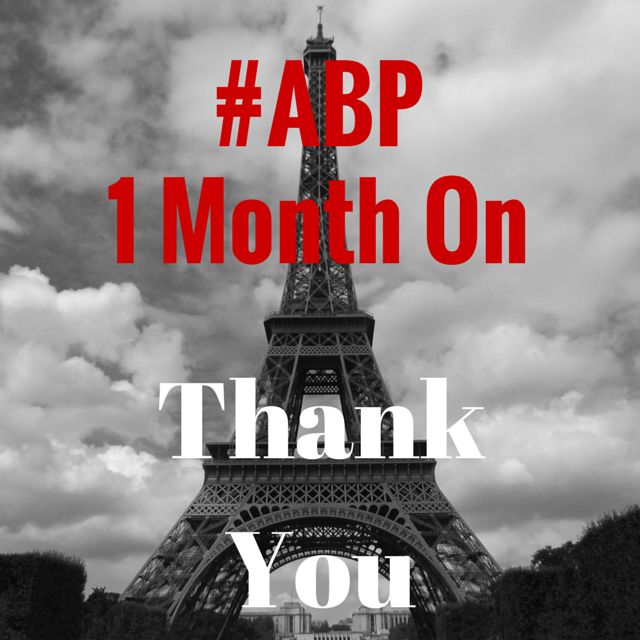 #ABP One Month On

It’s just over a month since I first self published Americans Bombing Paris. I thought I would share some things I have learnt and that I have had to unlearn.

There is more advice online on self-publishing than anything else in the history of humankind. This may not be true but it sure feels like it. Much of this advice is exactly the opposite of what you read ten seconds before. But hey, most things in life seem to play like this.

It is called self-publishing for a reason. That reason being you have to do it all yourself and you have to be pretty darn selfish about finding the time.

Publishers and agents may be Satan’s minions but it sure must be nice to have someone else do things for you. Like anybody who works for themselves, if I don’t do it, not only does it not get done, but nobody cares or notices, a strange feeling, like Johnny in ABP says,

“Who the (and you must over bite your bottom lip when you say it) fuck am I?”

You can see why so many writers have whiskey for breakfast.

That initial feeling of publishing the Kindle on Amazon was short lived but still exhilarating. It was immediately followed by the realisation that I had done the “easy part”; now came the more unnatural part, for me anyway, that of selling the book.

Getting the first paperbacks was also a pretty great moment. They are down stairs thrown at my back side, but for a couple of days they were shining lights towards a sparkly Malibu Hills future.

I used to get an email every time someone bought a book from Smashwords which led to further smartphone addiction, but all the Smashwords sales were in the first week and after nothing doing for the last couple of weeks I have paused Smashwords and Kobo and all those other sites in favour of concentrating on Amazon and seeing what I can achieve with them. To enter ABP in Amazon’s KDP Direct program they want the eBook for three months exclusively and my first born and a lock of my hair and a kidney (they sent that back). But they will try to help me sell it, which is more than the others do combined.

Half joking aside it has been a great experience and I am chuffed at all the interest. I have been trying to learn to hack so I can thank all those who bought one and find out all those who haven’t. The data is there but there are still apparently some privacy laws, although who really believes that is beyond me. If you watch the movie Enemy of the State Gene Hackman explains very succinctly that there is no such thing as privacy with electronic devices. None.

As usual, the movies told us, no one listened.

Facebook. The best so far. I know most of the people I am friends with, and Facebook seems to drive the most visits to the blog and to the book. But eventually I will run out of friends.

Twitter. Like trying to hit a flying bird with a stone from a mile away, but I like it the best. I hate birds and love throwing stones. Spoiler Alert.

LinkedIn. What does LinkedIn do this weather? Why do they keep telling me about work anniversaries? Nobody on earth wants to know about their own work anniversary, e.g.

Paul has been trapped in DeltaCon for three years, would you like to congratulate him?

People are very polite on LinkedIn though, strewth, it is like one long conference lunch.

Tumblr is useless so far for selling books. I have no followers last I checked which is pretty slick. Once the worm turns, like it does for everything on the internet, having no followers will be the new having followers.

Google+, plus what? Plus nothing.

I am also on Instagram which I seriously have no clue about.

In real life reviews are very important for books, on the internet they are vital. Why would anyone who doesn’t know me buy my book? So I have written query letters to around thirty people. These are influential book bloggers who may or may not write a review in return for a free book and much adulation. It is a curiously time consuming process but wholly necessary.

Please leave me a review on Amazon, that would be amazing.

Thanks again to everyone who has bought it. Means a lot.