My Reading Life 4: Books I Reread 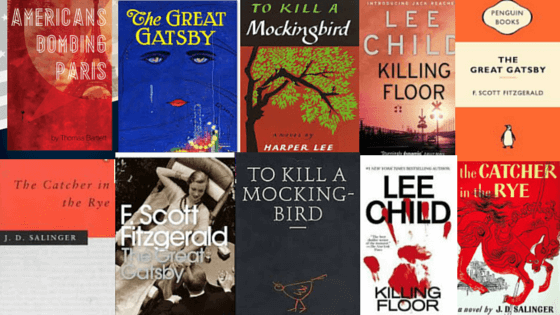 Listen while you read…….

Like the television show that allows brain inactivity, the child’s blanket drenched in sleep, the old body battered sofa, I have books I like to lie back into once a year like a good thing.

First is Gatsby, or whatever they are calling it now. I read it for the writing, the story is cool and I enjoy the parties, but none of that really compares with F. Scott surfing the prose right into the back of my brain. His prose makes most other writers look like cave painters. Highlights include everything he says about Jordan Baker, the louche golf professional, with allegations of cheating in her past.

“I suppose she had begun dealing in subterfuges when she was very young in order to keep that cool, insolent smile turned to the world and yet satisfy the demands of her hard, jaunty body.”

We are seduced by her “sitting down at the table as if she was getting into bed.”

“Nevertheless you did throw me over,” said Jordan suddenly. “You threw me over on the telephone. I don’t give a damn about you now, but it was a new experience for me, and I felt a little dizzy for a while.”

There is a load of hokem written about the book regarding its commentary on the American Dream; I’m not so sure. There is as much to be said about its commentary on how dangerous it is for the poor to associate with the wealthy, or how love does not always win, nor even put up a fight. Fitzgerald writes most eloquently on the coming of the Americans. He foreshadows how during the inter war years they were beginning to trample over everything and everyone. It also depicts the casual dangerous boredom of the rich; inured from reality they flick the pieces about the board until they are sufficiently amused. How they often wander off with the game half played and nothing put back.

See how easy it is to get involved in the hokem.

But that is for the academics. The book is read-in-an-afternoon length and goes well with coffee and cigarettes or after cocktail hour, a Tom Collins is always nice.

The whole book is basically just showing off and all the better for it.

I know I mentioned this one before but it, like Gatsby, is the nearest reading gets to gliding. The book begins with one of my favourite opening lines of all time and definitely the funniest.

“If you really want to hear about it, the first thing you’ll probably want to know is where I was born, and what my lousy childhood was like, and how my parents were occupied and all before they had me, and all that David Copperfield kind of crap, but I don’t feel like going into it, if you want to know the truth.”

I laugh every time I read it. In the end he does go into at least some of it and we discover the tragedy behind the book. Holden Caulfield is a moan, but he does have a certain panache. He goes to piano bars and chats up students’ mothers on trains.

But the melancholy is always there, and his descent becomes more and more inevitable. Nevertheless I always forget all that when I read it. I hope against hope that he pulls it together, but he never does.

My other favourite line from the book is

“It was that kind of a crazy afternoon, terrifically cold, and no sun out or anything, and you felt like you were disappearing every time you crossed a road.”

Factwatch: The author Salinger had a relatively busy/horrific WW2 in counter intelligence. Interrogating prisoners of war, being involved in 5 campaigns and liberating one of Dachau’s sub camps. After the war while he was involved in the Denazification of Germany, he met a half German half French woman named Sylvia Welter in 1946 and married her. Recently it has come out or someone has made it up that this woman was a former member of the Gestapo (although can one ever really leave the Gestapo?) and that that is why Salinger divorced her and sent her back to Germany after a few months in New York. In fairness…..

This is one of the most violent, badly written, shallow books ever published, in short it is a masterpiece.

I can no longer read any Reachers, like Michael Connellys or egg I have over-indulged and they make me nauseous. But I can still read this one. It is by far the best and no accident that it was Lee Child’s first.

The scenes in the prison when he fends off the white supremacists and the gang members (affiliates?) in two separate incidents are pure adrenalin.

Reacher is a half-French half-American six foot four former army MP. He is of course also a crack investigator and like every single fucking military person we come across nowadays, a dead-eye dick sniper. The genius of the character is that because he was an MP special investigator champion sniper he is better than every soldier in the US military at everything. He is also able to speak French which means he is cosmopolitan.

“He was up on that plateau where you just did whatever needed doing. I knew that place. I lived there.”

Factwatch: Lee Child is the pen name of Jim Grant. The guy has two great writer names, how could he fail?

To Kill a Mockingbird by Harper Lee

Great movie, amazing book. Harper Lee wrote one book up until about twenty minutes ago, now she has another coming out “Go Set a Watchman” along with lots of questions.

You made us wait this long?

Is there any chance on earth that it is any good?

Are you being manipulated?

Are these all stupid questions?

I have no idea about any of the above save to say that if you have not read this book you have not lived/need to get a move on.

It is that good.

It teaches and illuminates far beyond the scope of almost any other book and it’s also a complete romp.

It is no harm to have seen the movie, to have in mind Gregory Peck as Atticus Finch the father of the narrator Scout, a man as benevolent and wise as one could never come across.

Lee gives us a dusty, glinted childhood thriller allowing Scout to show up the adult ways for the follies they are. All around her the world lurches and mangles but the humans in it just about manage to regain balance before teetering into the abyss.

The characters in the books and the back long gaze into southern small town life delivers us a messy familiar world without the platitudes one comes to expect when dealing with such dangerous issues as race, rape and corruption.

But besides all that palaver it is a truly wonderful book.

I borrowed it the day before my German Junior Certificate examination and spent the day lying under the dining room table hiding (??I was alone in the house) devouring it while listening to Where is my Mind by the Pixies on repeat.

One of the great days and books of my life.

My Reading Life 5: Good Books that are Crap

My book, my blogs and my stuff