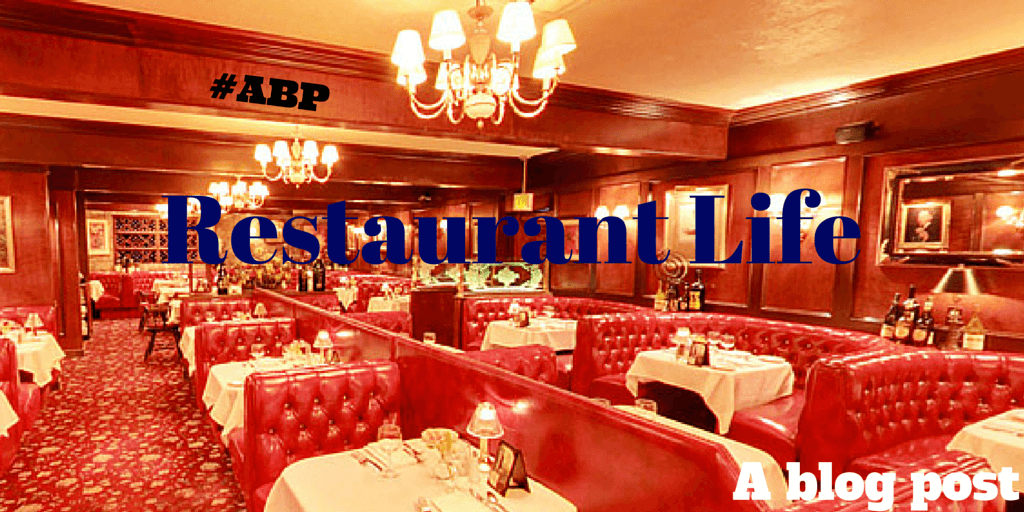 The last day I ever worked in a restaurant I was nearly burnt alive, and even more nearly took someone with me. It was definitely time to get out.
And I have.
But I still think about restaurants, like an ex I never fell in love with but I stayed with for a good part of my adult life.

I’ve tried to write a book about a restaurant, I have started it twice. But I have nothing truth be told; a desire to write a book is not enough. I need an itch or an ember before I can start. I’ve even drawn my imaginary restaurant a couple of times but nah no avail, I can’t get a decent run at it.

Restaurants provided many of us with well-paying employment when we were younger and in my case older. For some they also served as a vital motivation to stay in school because they taught us that life is tough. The smart understood quickly that it was better to get a degree and get a job sitting down. I didn’t follow this advice and worked a couple of years in McD’s before moving on to The Bad Ass. Both taught me many things about life and people, things I desperately needed and wanted at the time because I didn’t understand either.

Life lessons like how to talk to a group of drunks, break up a fight, deal with theft and robbery, spot a pick pocket, handle someone who ODs, speak to people high on heroin, or low from it. It was never dull. People tried to commit suicide in the toilets, staff and customers alike. That sounds terrible I know. Fortunately no one ever succeeded on any of my shifts, but as a 21 year old it was a curious responsibility. It’s given the rest of my jobs a certain shallow anti-climax feel ever since.

Each shift was a unique drama that existed only for those who were there. A drama that each of us experienced through the prism of our lives, our moods and our hangover levels. No shift was ever the same. My daily desire in a restaurant was to catch the wave that transported me outside of thinking and into auto acting, doing without intent. I loved when the orders and the customers together created a momentum that caused the clocks to whirr and time to fall away in giant blocks as I arrived at the end of my day, slightly dazed and bewildered after emerging from the time warp. The regular high was difficult to replace. I still miss it.

Sure, I don’t miss those customers who truly believe that being a jerk is character, personality or wit. But then people are like that. I was no picnic either surprisingly. I was always ready to repel the public hoards, I often saw the public as the enemy, there to ruin my shift. I enjoyed working with the staff, and later when I spent a year or two in the kitchen I began to enjoy the single rigour of working with food. That and burning layers of skin off my hand.

The addiction, my drug, was the speed, the feeling of the mechanism revolving and being inside the cog. Moving should not be underestimated either. The other great miss I have since I sat down to write full time is moving around. When I was in a restaurant there was always something great about legging it around slaloming the stainless steel. That Matrix like vision of the right things happening quickly and at once. The perfect insight, the complete awareness of sounds and silences without thought, of swerving on through the vapours. They are all gone for good now.

When things worked it was a sweet ride, aloof from the moments, simply smooth. When it didn’t work, when the inevitable mistakes were made that took time to recover from, when the item had disappeared and now the problem was live and suffocating, constricting breath and clarity and any type of bon homie, it was easy to tip over in to the flames. Blame and anger could appear, lots of pent up steam, the constant heat, sweat and action made everyone except the very best more monstrous. I got better as I lived longer, but I never fully escaped Hyde or Jekyll or whomever it is that changes into the monster.