Me Versus the Six Foot Rat 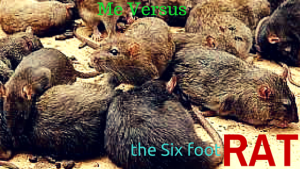 Me Versus the Six Foot Rat

Sunk in the sofa, squirrelling away my life, the street had gone quiet. But then this was South Dublin, it was traffic or nothing really. I listened for the familiar sounds of people driving around and around enjoying their lives, nothing. It was circa the discovery of sun dried tomatoes, peak breakfast roll, garages all emporia to delicious grease, chicken and stuffing was the code word of the day, everyday.

The house sat adjacent to the front, kind of keeping-an-eye angle, which was vigilant and sweet. I knew it was coming but then we all know it is coming. I had begun to speak to myself like this, whether there was any value in it, who knows. I heard a man or a woman scream in complete terror about fifty metres away; at that pitch, at that level of terror we are all the same. There was no need to look out, word had got back to me through the usual channels. There would be money, that was all that mattered. Only for the winner, winning was all that mattered.

I didn’t rush though, I was a little bit Smoky Joe. I kidded myself that it would give me an edge but we all know that is not true. I’d sat so many hours in that godforsaken chair that it gasped when I got up. I put aside the joy-pad. ‘Perhaps for the last time’ occurred to me, but I ignored it. I needed to focus.

The doorbell failed, it rang but there was something wrong with it so all I heard was the failure. Apt, right? I looked around the room grasping for some regret or melancholy, but they both take ages and I didn’t want to be rude.

I stood square in front of the door as the door bell failed to ring properly again. I allowed for the arc of the door, the clearance I think is what people call it. I swallowed, I am not going to lie to you I was pretty anxious.

I opened the door and the first thing that hit me was that clammy musty tang of old wet rat. I was expecting it but I still nearly got caught as the rat’s gnarled vicious claw swiped diagonally down at my eyes; at the very last minute I stepped beautifully aside. It was a true rat, a brown rat. I’d done some research; this was from the genus Rattus and was pure true rat. The six foot tall true rat had come to kill me.

I spun outside and grabbed at the rat’s claw as it swiped down my other eye. This time it drew some blood. Tetanus city was what flashed through my head. I stamped hard down on the rat’s foot, the standing paw. The rat’s eyes flashed with that red glint I so loathed and feared. I now was the other side of the rat. I spun into a kick as the rat tried for the first time to bite me. If it did I was dead. A corpse to be feasted on by the true rat.

This was not the rat’s first fight: there was a fetid sick looking gash on his shoulder. I plunged my hand into the wound and forgot about civilisation and my past and future. The rat squealed in pain; the wound was mulch inside. As I pulled everything I could from the wound the rat threw me across and into the front wall of the house. I naturally hoped I was dead.

The rat pounced, all six foot of it slashing my legs deep and gory. My hand was still covered in the rat’s puss and guts. I twisted upwards catching the rat’s eyes and head with a twisted foot lock. I stood up into the manoeuvre as the rat momentarily lost its balance, but it was enough. Standing now and with all of my fat weight I knelt onto the rat’s head and listened to the cracking, the victory cracking.

I collapsed but never let the hold go; I’d learnt the hard way: it takes us a long time to properly die, sometimes we change our minds.

Not this time though. True rat was dead.

Me Versus the Eight Foot Owl

PS I am more terrified of rats than you are, so stop moaning.